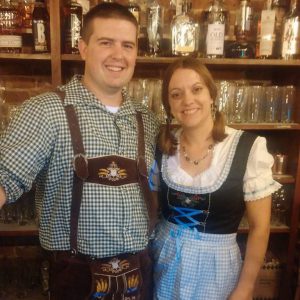 Chris and Tammy Rahn are the owners of Stubborn German Brewing Company and lifelong residents of Waterloo. Chris has been homebrewing since 2005 and his hobby quickly became a passion. He has won numerous awards for his homebrew and got involved in the St. Louis Brews Homebrew Club. Through the Brews, he took the BJCP exam (Beer Judge Certification Program) and scored at a National level. In 2015, Chris graduated from the American Brewer’s Guild in Vermont’s Brewery in Planning program. Chris and Tammy have been planning and working on Stubborn German Brewing Company since 2013. They took over the main floor and basement of the Masonic Lodge in April, 2015 and with the help of Tammy’s dad, Don Landgraf, spent one year remodeling and bringing the building up to date. Chris and Tammy were high-school sweethearts and have two young boys. The Rahn’s are very active in the community and love to see Downtown Waterloo thriving!

The brewery occupies the first floor and basement of the Masonic Lodge in Waterloo. The Masons have a dining hall on the second floor, and their meeting room is on the third floor.

The remodel started in April, 2015 and took approximately one year. From pouring concrete in what was a dirt basement floor, to upgrading the electric, HVAC, water, gas, etc., everything was brought up to code and made into a usable space. Some items to note: